The Nature Museum was founded in 1934. It is based on research collections of the beaver compiled by W. Khlebovich. There are several stages in the history of the Museum creation.

The first exhibit items for the Museum collection were made in 1935 by V.Lavrov, a zoologist, and I.Kovalevsky, an expert gamekeeper.

During the Great Patriotic War, the research collections of the Museum were taken to the home front. Due to the fact, that there was no opportunity to evacuate exhibit items, they were put in two large rooms, occupied by the Museum by the beginning of the War.

In 1934 the research collections got back from the evacuation, new exhibit items were added, they were made by I.Kovalevsky, an expert gamekeeper, V.Ivanov, a taxidermist, and his student M.Remizov. Their works created in the postwar decade became the basis of the Museum collection.

In this period the first artistically designed dioramas were created. They became a hallmark and pride of the Museum for years to come. Animals, the inhabitants of the Reserve, were represented in the dynamics against the background of the wild landscape of their habitat.

In 1946 the Nature Museum of the Voronezhsky Biosphere Reserve was named the best faunal museum in the region.

The Museum collections and exhibit items were shown at many exhibitions, even internationally. The collection was repeatedly used in the production of scientific TV programmes, on the set of documentaries and feature films. Moreover, science students from universities of Voronezh and neighboring regions did an internship at the Museum.

The Museum attendance was boosting each year. Soon, it was decided to build a modern administrative and tourist complex where there was a place for a new Museum collection with convenient location of showcases and a possibility to receive big amount of visitors at the same time.

Taxidermists, research associates, artists of the Moscow and Voronezh art funds took part in the design of the collection. Later these old museum exhibit items became the basis for creating new colorful dioramas and showcases.

In the 1990s the number of the Reserve visitors significantly decreased because of a difficult economic and political situation. In order to attract tourist’s attention, the Museum staff gave lectures at schools and universities, told about the Reserve in newspaper articles, on TV and radio, participated in environment-oriented contests and campaigns. This work is still going on, but it is currently done by the Voronezhsky Biosphere Reserve Environmental Education Department.

A modern Museum collection occupies more than 800 m²: a separate room is dedicated to the beaver. Here you can learn about the beaver biology, the role of the Voronezhsky Biosphere Reserve in preservation and restoration of the population and about the work of the experimental breeding ground. 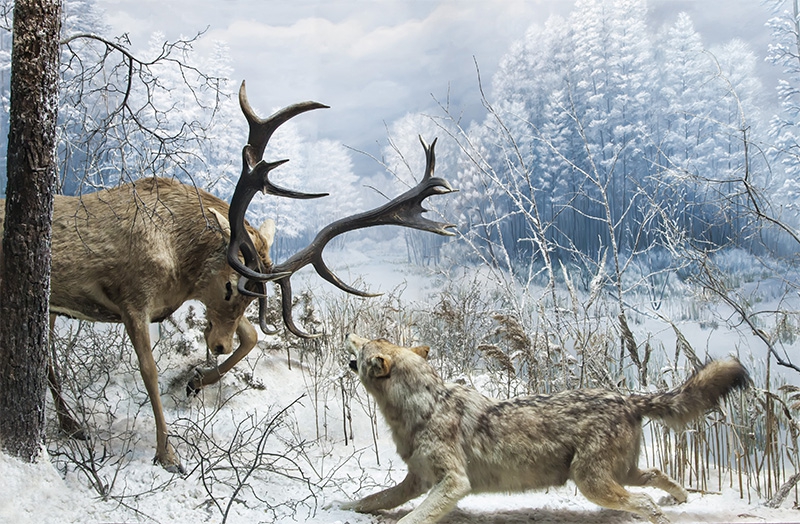 There are European red deer and Boar biogroups in the museum room named «Ungulates», in the Forest room - the diversity of the Reserve’s wildlife (mammals, birds, semi-aquatic animals, collections of insects).

The amazing central panorama of this room «Usman river floodplain» constantly attracts Museum visitors. Today, you would not find the similar showcase in any other museum in Russia.

In late 2009 and early 2010 there was a 3-month restoration of the collection, due to which the Museum was refurbished. The design of most of the dioramas was changed, modern information boards were placed, colorful posters with photos of animals were hung, the modern showcase lightning was installed.

In 2016-2018 a new exposition has been created in the museum, called «The Protected Usmansky Pine Forest. Philosophy of the terrain». We will try to tell visitors, very briefly, how this forest is organized, why pine grows in one place, oak in another, and in the third - black alder, and also how the continental bogs differ from marshes.

We invite you to make a fascinating journey to the Voronezhsky Biosphere Reserve. The Museum staff will try to make this journey unforgettable!